The IPB institute is engaged in researching plant biochemistry-related problems in four research departments.
Read more about our Research Highlights.

What is plant biochemistry? 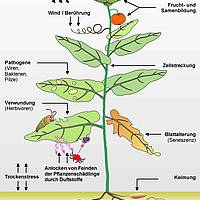 Plants, like all living organisms, are made up of molecular components that are interacting with each other in order to form and keep alive structures of vegetable tissue. This interaction of molecules describes a transformation of substances into other substances – a metabolism. It is this metabolism, i.e. generation and conversion of vegetable substances, which is the subject matter of this relatively new branch of research – plant biochemistry.

Plant researchers distinguish between primary and secondary plant metabolism. All fundamental growth and development processes are controlled by primary metabolism products. In addition, plants produce a large number of biologically active substances which enable communication with their environment. Plants are tied to their habitat and cannot move away; hence, they have to easily adapt to changing environmental conditions. Their tool of choice is chemistry: synthesis secondary metabolism products.

Secondary plant products include vitamins, antibiotics, pigments, flavorings and fragrances and many other highly potent active substances, including numerous substances with highly toxic effects. It has been suggested that secondary plant products generally enhance plant fitness. Such products play a major role, e.g., in their defense against herbivores and pathogens. Some products are known for their ability to attract insect pollinators while others protect plant organisms from UV light.

Most natural products have yet to be investigated

The number of all naturally occurring secondary plant metabolites is huge. Only a fraction – about 200,000 – have been isolated and described to date. Their chemical compositions are of an enormous structural variety; Synthetic pathways within plants are often complex and branched and duplication of several of those substances in a test tube is still a challenge for chemists. The purpose of many secondary plant products in a given organism is still unclear. Identification of the biological functions of certain secondary substances and their significance for a plant will keep legions of researchers busy in the years to come.

The biosynthesis of morphine

Biosynthesis of morphine (excerpt) in an opium poppy plant is composed of at least 17 successive reaction steps. In the meantime, some 20 different synthesis methods to produce morphine have been developed. Efficiency of none of those total syntheses, however, is sufficient to make industrial-scale application worthwhile – too many synthesis steps generate very low yield rates. This is the reason why morphine is still produced from opium poppy that is legally cultivated for this purpose in Australia, India and Turkey. 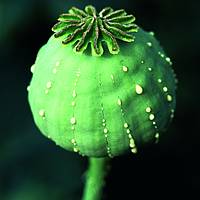 Abb. 4: Milky exudate emerging from an incised opium poppy capsule is changing its color to brown after drying. This so-called raw opium contains many different alkaloids, notably morphine and codeine.

For man, plant natural products in the form of plants from which they are produced are a distinctive part of cultural history. Their herbal decoctions and extracts for all conceivable illnesses and ailments but also as poisons and intoxicant have accompanied man for millennia. The best-known representatives of pharmaceutically used secondary substances belong to the large class of alkaloids.

The discovery of phytochemicals

The discovery of phytochemicalsIn the mid-19th century, knowledge of curative and poisonous properties of certain plants was taken from the collective sub-conscious of pure collecting and describing to the higher level of deliberate identification and separation of constituent substances. Chemists were the initial drivers of research into the so-called phytochemicals. Their studies resulted in development of new separation and purification methods and new findings on structure elucidation and synthesis and eventually provided the fundamentals of today’s organic chemistry. They soon gave up their concentration on characterization of medically effective natural products but also investigated such that promised utilization as dyestuffs, fibers, adhesives, oils, waxes, seasoning substances, perfumes and drugs.

The birth of a new branch of research 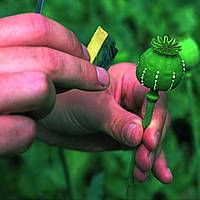 The finding that myriads of natural products possess biological activities prompted new questions among biologist and chemists and the urge to gain a better understanding of this delicately balanced synthesis network in plants. In addition to the central aspect of usefulness of secondary substances for the plants, they were above all interested in the mechanisms of their production: What are the biochemical and genetic tools that make plants into such high-capacity substance producers?

Which final products are generated from which starting materials and with which enzymes? Are active substances generally synthesized or is synthesis activated on demand, e.g. in stress situations? What are the exterior and interior signals that condition activation and regulation of certain synthetic pathways? This and similar questions gave rise to the foundation of the Institute of Biochemistry of Plants here in Halle more than 50 years ago. It was the first institute of its kind in all of Germany.

Kurt Mothes brings together all experts

In order to deal with the raised questions, the founder of the institute Kurt Mothes brought together experts from all relevant disciplines: Biologists, chemists, biochemists and pharmacists. The institute still benefits from his interdisciplinary approach of convening expertise from different branches of knowledge and exploiting synergetic effects from their close proximity. The fascination with secondary metabolism and the diversity of plant natural products has remained a motivating force behind research work at the IPB. All processes which have enable plants to survive for millions of years can be traced back to their enormous synthetic potentials. Research into biosynthesis of natural products, however, time and again stretched into the adjacent specialty areas of primary metabolism and plant physiology. 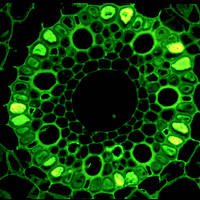 Abb. 7: Sections and tissue preparations are among the standard methods at the institute

Those multi-faceted fundamental research projects were never implemented to the detriment of application-oriented aspects of plant biochemistry at the institute. For instance, the search for new plant and fungal constituent substances which could serve as lead structures for developing new pharmaceuticals, antibiotics, plant protecting agents and cosmetics, was from the beginning a distinctive pillar of the institute’s research profile. This key role of natural products chemistry is still undiminished. Combating multi-resistant bacterial strains, for which administration of conventional modified antibiotics is unsuitable, is but one example of current challenges. The solution for this problem is probably already available – but as yet not discovered. It has to be fished from out of the sea of unknown natural products. Contemporary data-processing technologies have enabled systematic combing through of natural resources.

For further information about plant biochemistry and the history of our institute, please, refer to our festschrift ‘Vom IBP zum IPB – 50 Jahre Pflanzenbiochemie in Halle’