How leaves communicate with roots: The Journey of Jasmonates 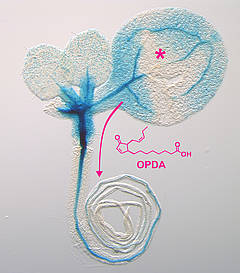 Following damage to leaves (asterisk), the activation of Jasmonate-regulated signalling (blue) in roots depend on the translocation of hormone precursors, including OPDA, to coordinate whole-plant growth and defense responses. Image by Adina Schulze and Stefan Mielke.

When leaves are exposed to environmental challenges, they communicate their status to other organs such as roots, to effectively coordinate whole-plant responses. Scientists at the Leibniz Institute of Plant Biochemistry have now provided new insights on how different plant organs communicate with one another. Dr. Debora Gasperini and her team have found that precursors of the stress hormone Jasmonate-Isoleucine (JA-Ile) move from damaged shoots into undamaged roots to integrate growth and stress responses across the entire plant.

When leaves are wounded, for example by chewing insects or mechanical damage, JA-Ile levels increase near the wounding site and also in distal unwounded tissues such as roots. JA-Ile is essential to induce defense responses and protect plants against the damage, however it was unclear how is the shoot-to-root long-distance communication executed at the molecular level. By using the plant model species Arabidopsis thaliana, Schulze et al. have shown that the activation of root defense responses depends on the relocation of specific signalling molecules from damaged leaves through the phloem (the vascular tissue that transports sugars and other metabolites).

Chimeric Arabidopsis plants as the key
The research team decided to study the shoot-to-root communication problem under physiologically relevant conditions, as close as possible to what occurs in nature. Therefore, they triggered plants to produce their own hormones as opposed to treating them with externally provided molecules, and generated chimeric plants which are wild type (wt) in their shoots but deficient in various steps of JA-Ile production in the roots (and vice versa) by grafting. When wt leaves were mechanically wounded with tweezers, jasmonate responses were observed in JA-Ile deficient mutant roots. Conversely, when JA-Ile deficient mutant leaves were wounded, no response was observed in wt roots (even if wt roots are able to induce jasmonate responses). These results showed that a signalling molecule produced in wounded shoots moved into roots.

Which Jasmonates mediate the communication between leaves and roots?
The scientists then identified the moving compounds by profiling JA-Ile and its precursors from mutant roots which cannot synthesize these molecules and whose presence derived from wounded wt leaves. Interestingly, they uncovered that the hormone precursor cis-12-oxo-phytodienoic acid (OPDA) is shoot-to-root mobile, while the bioactive JA-Ile conjugate is not. Upon root relocation, OPDA is converted into bioactive JA-Ile to induce Jasmonate responses. This is the first report on OPDA mobility in plants and Schulze et al. provide compelling evidence on the importance of hormone pool redistributions during stress acclimation. The new findings open up new research areas in plant hormone biology and broaden our views on long distance communication in higher plants.