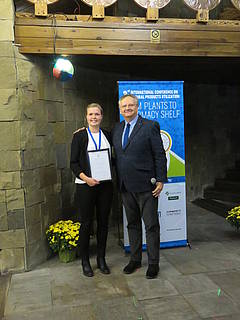 Pauline Stark recently won the Best Poster Award at the "3rd International Conference on Natural Products Utilization: from Plant to Pharmacy Shelf (ICNPU-2017)". Among the more than 250 poster presentations, she was one of four awardees selected by the Phytochemical Society Europe. Pauline is a food chemist and PhD student at the Dept. of Bioorganic Chemistry, where she works on the Leibniz Association-funded project "St. John's wort against Alzheimer's". With her poster, she presented her study on 20 North-American and European subgroups of the St. John's wort species Hypericum perforatum. With chemical analytical methods, the young researcher obtained an overall view of substances and substance classes present in every subgroup. "This so-called metabolite profiling is a different and novel way to to study a well-characterized medicinal plant such as St. John's wort, which has usually been treated by classical approaches of isolating a single active compound." she explains about her project. When asked about the impressions from her first large, international meeting, she replies, "I was, for instance, impressed about the good and wide-spread renown of the IPB among the scientific community“ and she adds "of course, I also took home with me some fresh motivational push through the prize." We congratulate on the poster award and wish Pauline continued success in her PhD work.