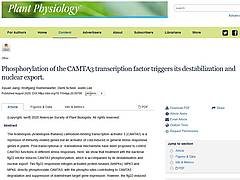 In an article in Plant Physiology, IPB scientists have examined the role and function of the calmodulin-binding transcription activator 3 (CAMTA3) in Arabidopsis. CAMTA3 is known as a transcription factor localized in the cell nucleus that performs various regulatory functions. In the pathogen-induced defense scenario, CAMTA3 was observed to play a role in the negative regulation of defense genes. In cold and other environmental stress, however, it exhibits an activating function on the corresponding temperature stress-inducible genes. Thus, depending on need and threat, CAMTA3 acts as a repressor or activator of stress-relevant response genes. How the plant regulates this alternation of opposing functions has not yet been clarified.

At least for the plant immune response, the IPB stress researchers now shed some light on the complex process. They could show that CAMTA3 is phosphorylated in a signaling cascade induced by the PAMP flg22. The phosphorylation causes both a destabilization of the transcription factor and its removal from the cell nucleus, resulting in derepression of plant defense genes. The phosphorylation of CAMTA3 - as the scientists proved - is carried out by MAP kinases (MAPKs), but other kinases must be involved in this signaling process, because phosphorylation and nuclear export of CAMTA3 also occurred when the phosphorylation sites for MAP kinases were removed. First indications point to a calcium-dependent kinase (CDPK).

However, many questions regarding the stress-specific signal response are still open. The scientists speculate that cold and pathogen stress could activate different signaling pathways in parallel. In that case, CAMTA3 would be an important junction for two different flg22-activated phosphorylation pathways of MAPKs and CDPKs and or for linking biotic and abiotic stress responses.