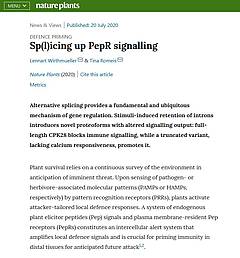 News and Views for Nature Plants.

Given their strong expertise in the field of plant immune responses, Tina Romeis and Lennart Wirthmüller were recently invited to write a News and Views article for Nature Plants. They comment in their article on a publication by Dressano et al., which uncovers alternative splicing as a fundamental mechanism of gene regulation in plant defense signaling. On what do they report?

Upon perception of PAMP structures by pattern recognition receptors (PRRs), plants activate attacker-tailored local defense responses. The membrane-associated BOTRYTIS-INDUCED KINASE 1 (BIK1) constitutes an early convergence point of defense signaling downstream of many PRRs. BIK1 promotes the production of reactive oxygen species (ROS) and the influx of calcium to the cytosol, which are both essential for defense signal propagation from local to systemic tissue. Activation of local and systemic immunity is, however, costly for the plant and thus under tight control of negative regulation. Therefore, the protein amount of the key enzyme BIK1 is regulated through phosphorylation by CALCIUM-DEPENDENT PROTEIN KINASE 28 (CPK 28) and ubiquitinylation by various E3 ligases. This repressive control system results in a continuous degradation of BIK1, which prevents the activation of defense signaling.

In their study, Dressano et al. have investigated in detail the relevance of this negative regulatory mechanism for the local immune response and discovered a new component. In their commentary, Wirthmüller and Romeis extend the discussion and add a novel aspect that this negative regulation, respectively its bypass, may mechanistically play a central role to allow defense signal propagation into the entire foliage of a plant.

To transmit immune signals from cell to cell, plants have an arsenal of endogenous elicitor peptides (Peps) and their Pep receptors (PepRs), which constitute an intercellular alert system that amplifies local defense responses and primes distal tissues for anticipated future attack. Dressano et al. could now shed light on how the repressive control system of CPK28 and BIK1 is switched off to allow amplification of the signal.

In their study, the authors around Dressano demonstrate that PepR activation leads to dephosphorylation of the IMMUNOREGULATORY RNA-BINDING PROTEIN (IRR). The nucleus-located IRR is involved in alternative splicing processes. Dephosphorylated IRR protein produces incompletely spliced mRNAs, which may result in the malfunction of the corresponding proteins. In the CPK28 mRNA - as a target transcript of IRR - alternative splicing leads to intron retained mRNA, which translates into the truncated CPK28-RI isoform that lacks two EF hand calcium-binding motifs. Consequently, CPK28-RI kinase can no longer be activated by calcium and is unable to phosphorylate BIK1. As a result, BIK1 is no longer degraded. Thus, the amplification of the local and initiation of the systemic defense scenario can start.

Alternative splicing to intron-retained mRNAs that results in truncated proteoforms of key signaling proteins appears to be a common principle of response amplification in plants. It might also play a role in other adaptations, for example to salt stress. Dressano et al. are now paving the way to a better understanding of these complicated regulatory networks, as Romeis and Wirthmüller point out.