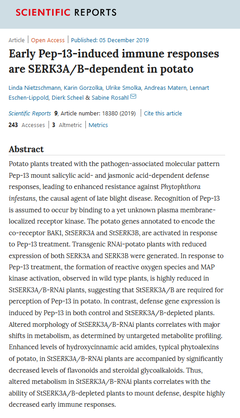 The co-receptors StSERK3A and StSERK3B seem to play a role in the early immune response of potatoes against Phytophthora infestans, the causative agent of late blight. According to recent findings at IPB, the coding genes of the StSERK3A/3B co-receptors are activated in response to Pep-13 treatment. Compared to the wild type, RNAi-based StSERK knockdown mutants of potato showed only reduced reactions of the early immune response after Pep-13 treatment, such as decreased formation of reactive oxygen species and attenuated activation of MAP kinase cascades. The Pep13-induced late immune responses, like the activation of defense genes, were enhanced in control and mutant plants. The mutants also exhibited an altered morphology and major shifts in metabolism compared to the wildtype plants. The findings suggest that the two co-receptors StSERK3A/3B are necessary for the perception of Pep13. The corresponding receptor - presumably a membrane-localized receptor kinase - is not yet known.