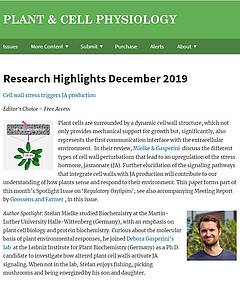 Congratulations to Stefan Mielke and Debora Gasperini! Their latest review on the interplay between cell wall damage and jasmonate production was selected by Editor's Choice and highlighted on the Plant Cell & Physiology website. Plant cells are surrounded by a dynamic cell wall structure, which not only provides mechanical support for growth but, significantly, also represents the first communication interface with the extracellular environment. In their review, Mielke & Gasperini discuss the different types of cell wall perturbations that lead to an upregulation of the stress hormone, jasmonate (JA). First author Stefan Mielke was also spotlighted. He studied Biochemistry at the University of Halle and joined Debora Gasperini’s lab at the IPB as a Ph.D. candidate to investigate how altered plant cell walls activate JA signaling.