Mind the lab: Science to go in subway station 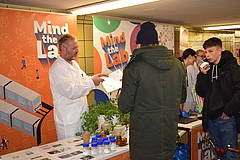 On November 8, IPB and Science Campus Halle (SCH) presented hands-on science in the Berlin subway station Friedrichstraße. Numerous other research institutions participated in the STEM awareness campaign Mind the lab and presented their projects in six Berlin subway stations. The format, initiated by SciCo, a non-profit organization for science communication, started this year as a pilot project in Germany's capital. It was a great success. The joint IPB/SCH stand was visited by numerous random passers-by, as well as by interested people who had come to specifically inform themselves about our research projects in plant-based bio-economy. Here we presented natural sweeteners from plants as well as teas and flavourings to smell and taste. This introduction by entertainment led quickly to serious discussions about the relevance of science for society or a critical examination of genetic engineering approaches.