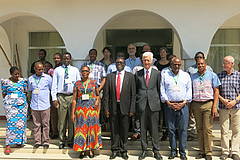 The interdisciplinary, German-African team of researchers of the Tri-Sustain project recently met for their first joint workshop in Tanzania. Photo: IPB.

About 80% of African population consults traditional healers in case of illness. These practitioners often use plants for treatment which they collected themselves. Such plants, however, have become increasingly rare and are hard to find around the typical collection sites. The project Tri-Sustain tries to solve this problem (also see „Heilpflanzen in Afrika“ press release by University of Halle - in German only). The German Federal Ministry of Education and Research (BMBF) is funding this interdisciplinary approach that aims to identify ecologically endangered and therapeutically valuable African plants and to ensure their sustainable use.

From November 14 to 18, 2017, the first Tri-Sustain workshop took place in Bagamoyo near the major Tanzanian city Dar-es-Salam. The project led by University of Halle researchers also involves the Leibniz Institute of Plant Biochemistry (IPB). The IPB's natural products chemists Dr. Norbert Arnold and Dr. Serge A. Foboufou Tanemossu contribute their expertise in isolation and structure elucidation of plant substances. The partnering universities from Tanzania, Botsuana and Ethiopia, on the other hand, contribute their knowledge on endemic medicinal plants and enhance the team's spectrum of methods with bioactivity tests against the AIDS-causing HIV.

During the recent workshop, the project's junior researchers were introduced to the preliminary work and the methods. The German Academic Exchange Service (DAAD) supports the Tri-Sustain graduate students for four years and facilitates continuous training at all partnering institutes.