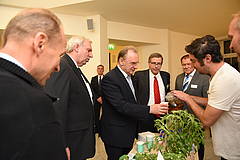 Science meets politics with a colourful programme for the Parliamentary Evening of the ScienceCampus Halle. Fotos: WCH / Freddy Czaja

The first Parliamentary Evening of the ScienceCampus Plant Based Bioeconomy Halle was a great success. On September 27, representatives of the campus and regional companies had invited to Magdeburg, to show current developments as well as the potential of biobased research for the region. As a member of the ScienceCampus, the IPB participated. IPB scientists attracted the attention of the politicians with exciting exhibits on plant flavourings. They provided furthermore information on plants drought stress.

In addition to the experiments, there was an ambitious selection of lectures that dealt with the regional importance of bio-economy on the basis of concrete research projects. Saxony Anhalts prime minister Reiner Haseloff opened the evening with a welcoming address. The evening ended with good discussions between all participants from politics, science and industry.