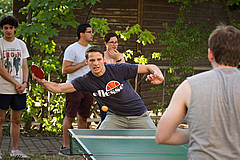 Tom Schreiber and Stephan Grunewald at the final of the single competitions. Photo: Jonas Kessel, IPB

While sometimes scientist’s ideas skip back and forth like table tennis balls, now it actually was the balls themselves. You could clearly see that IPB junior researchers are not only interested in plants, cells and enzymes as the recent table tennis tournament on 1st August was very well received. A total of 27 players competed in a simple knockout system. Next, they competed in doubles, where 17 different teams bounced the fast balls with fast racquets. The atmosphere was great, the weather as well, and a large buffet with food from all over the world delighted both palate and soul. Just the sun became scarce towards the end, so that the master players had to complete the final double rounds at the indoor plate.

A big thanks for the perfect organisation of the event goes to the Doctoral representatives Anja Knorrscheidt, Carolin Alfs and Chris Ulpinnis as well as to Stephan Grunewald, who was active prior to as well as during the competition explaining the rules and acting as referee - when he wasn't busy playing and winning himself. We say thank you and congratulations!