The plant hormone auxin somehow does everything – but how? 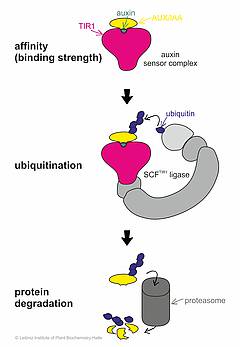 Affinity of the auxin sensor complex, as well as AUX/IAA ubiquitination and degradation were for the first time interrelated by Winkler et al. using two auxin sensors from Arabidopsis as an example. This study thus not only provides important insight on the finetuning of auxin responses in plants, but also helps to understand how small signaling molecules can modulate protein degradation.

A plant knows to grow towards the light, knows what is its main shoot, knows when and how to let lateral roots emerge – all these processes and many more are controlled by the plant hormone auxin. Indeed, various auxin concentrations in plant cells and tissues cause a variety of essential growth and developmental processes. Therefore, many research groups aim to elucidate the way plants interpret the auxin signal and translate it into a specific process. Also Dr. Luz Irina Calderón Villalobos, head of the Signal Integration Group at the Leibniz Institute of Plant Biochemistry Halle (IPB), and colleagues addressed that question, since auxin serves as their model system for investigating signaling molecules in protein degradation. They recently studied variations in the auxin signaling pathway that occur right from the level of auxin perception and successfully published their results in Nature Communications (Winkler et al. Variation in auxin sensing guides AUX/IAA transcriptional repressor ubiquitylation and destruction. Nature Communications, 2017, doi: 10.1038/ncomms15706).

In order for a plant cell to respond to the auxin signal by dividing, expanding or differentiating, the genes necessary have to be transcribed. As AUX/IAA repressor proteins prevent these genes from being activated, they first need to be degraded. Such AUX/IAA break-down is accomplished via the cellular protein degradation machinery, the ubiquitin-proteasome system. As a part of this system, a ligase of the SCF-type will use a TIR1 recognition protein to target AUX/IAAs, and subsequently attach small marker proteins, so-called ubiquitins, to the repressor. Interestingly, TIR1 and AUX/IAA will only interact whenever the cellular auxin concentrations rise, because auxin acts like a molecular glue combining both proteins to form an auxin sensor complex. Thus, only after the auxin cue, the SCFTIR1 ubiquitin ligase recruits and ubiquitinates its AUX/IAAs targets. As a consequence, the ubiquitinated AUX/IAAs are recognized, unfolded and degraded by a large proteolytic complex, the proteasome. Once the AUX/IAA repressor is destroyed, the repression of corresponding genes is relieved and auxin response genes can be transcribed. While this general mechanism of auxin perception is well understood, it bears great potential for variations which are still underexplored. Plants possess several homologs of TIR1 target receptors as well as a number of AUX/IAA repressors. Therefore, manifold auxin sensor complexes are conceivable. Arabidopsis, for example, has six TIR1 homologs and a 29-membered family of AUX/IAAs. Could a variety of auxin sensor combinations possibly allow a nuanced auxin perception that gives rise to specific auxin responses in the plant?

Dr. Luz Irina Calderón Villalobos and team addressed this question by studying two auxin sensor complexes from Arabidopsis with regard to their biochemical characteristics. They chose to investigate a combination of TIR1 target receptor with either one of two closely related AUX/IAAs, IAA6 or IAA19. Their findings suggest that the TIR1-IAA19 auxin sensor binds the hormone with higher affinity than TIR1-IAA6. Since after the auxin-mediated complex formation, the AUX/IAA is immediately ubiquitinated and degraded, they also analyzed these follow-up events. For that, the researchers for the first time recapitulated ubiquitination of AUX/IAAs in the test tube, which is a sophisticated undertaking. All enzymes and proteins necessary for the ubiquitination reaction had to be produced and purified in an active form. Martin Winkler, first author of the study and biochemistry student at the Martin Luther University Halle-Wittenberg, pursued this ambitious task and successfully implemented it during his master’s thesis at the IPB. With this methodical tool, the researchers were able to provide evidence that an SCFTIR1 ligase more rapidly attaches more ubiquitins to IAA19 after auxin supply than to IAA6. This result nicely matched the stronger binding observed in a TIR1-IAA19 auxin sensor complex. Furthermore, they show that the increased ubiquitination might also lead to a faster degradation of IAA19 in comparison to IAA6. With this, the IPB researchers corroborate their hypothesis that the affinity of an auxin sensor complex is likely to directly impact the subsequent steps, which could then mediate differences in gene activation.

Moreover, the study shed light on the evolution of the two very similar repressor proteins. Their underlying genes have arisen from genome duplications that occurred in the course of land plant evolution. These duplicates must have been advantageous, so that they have been retained and the AUX/IAA gene family expanded. Analyses of the two exemplary repressors studied suggest that IAA19 remains unchanged, while its duplicate IAA6 is functionally evolving. In that way, over the course of their evolution, plants might have acquired a spectrum of auxin sensors with different properties, allowing them to translate various auxin concentration inputs into precise signaling outputs. These outputs, in turn, would result in specific growth and developmental processes in the plant.

So far, plant auxin sensors are the best researched small molecule sensors in regulated protein degradation via the ubiquitin-proteasome system. Similarly functioning complexes have already been discovered in plants, as well as mammals. Importantly, many diseases like certain types of cancer trace back to abnormally functioning ubiquitin ligases. Small molecules that influence these ligases’ recognition of target proteins are a promising tool for medical research and therapy. Therefore, the insights on auxin sensing from this publication are relevant beyond plant biology.