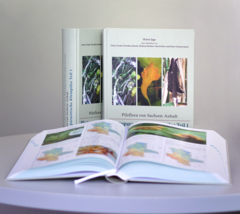 Together with the Saxony-Anhalt State Office for Environmental Protection (LAU), the IPB has published a further volume on the fungal flora of Saxony-Anhalt (German title: Pilzflora von Sachsen-Anhalt). The book contains an inventory of all phytoparasitic small fungi of the orders downy mildew, rust fungi and smut fungi present in the federal state of Saxony-Anhalt. It provides detailed descriptions including occurrence and habitat as well as spreading and declining tendencies of a total number of 789 fungal species parasitizing on 1085 host species.

The main author is the botanist and mycologist Horst Jage, who already in the 1970s intensively studied phytoparasitic small fungi. Since the 1990s, he has been guiding numerous field trips throughout the whole federal state, on which citizen scientists and enthusiastic laypeople collected a considerable amount of data. Also herbaria and more than 300 literature references were used to collect the data. In close cooperation with the LAU and the Botanical Association of Saxony-Anhalt, the excursion team could precisely classify numerous fungi species, create herbaria and produce maps on regional distribution of the respective host plants. The collected data were not only published in the printed volume but are also continuously digitalized and entered into databases.

As a comprehensive documentation of biodiversity, the book forms the basis for further scientific analyses of fungal populations and their alterations through climate change and biotope destruction. For many years, the IPB has been investigating fungi, which are a rich source of natural products with unknown biological activities. For this reason, the institute has already supported the publication of the first volume, which was published in 2009 and included an inventory of all higher fungi in Saxony-Anhalt. Mycology expert Norbert Arnold, head of the research group Natural Products & Metabolomics, took over the technical editing of both volumes. A third volume on powdery mildew and other sac fungi is planned.