The plant hormone auxin controls almost everything – what is the secret of its power?

The Leibniz Institute of Plant Biochemistry Tells All // Press Release 07.08.2017 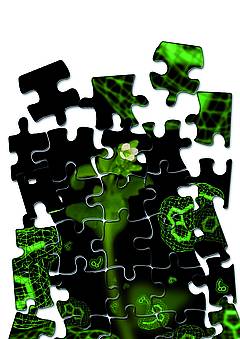 Plant scientists keep adding more and more insights to the global pool of knowledge about the ways the phytohormone auxin works.

Plants are smart enough to grow toward the light, they recognize their main shoot and know when to form lateral roots. All these different plant responses and many others depend on the phytohormone auxin. This involvement of a single signal substance in many signaling paths requires various levels of regulation by which the phytohormone induces different physiological processes. For about 20 years, plant researchers from all over the world have been working to unravel the phenomenon. Scientists at the Leibniz Institute of Plant Biochemistry succeeded in illuminating one important level of regulation. Their results received high ranking in the science journal Nature Communications. Together with their partners from the Martin Luther University, they had a close look on the evolution, which created this finely regulated auxin signaling network.

To unleash its power on the plant physiology, auxin must be recognized and bound by proteins inside the cell nucleus. These proteins are receptors. After binding the auxin, these receptors act on other proteins, which in turn activate all necessary genes for a proper physiological response. In response to auxin, plants may for example switch on growth inducing genes, which trigger cell division, stretching and differentiation.

In the model organism of plant science Arabidopsis thaliana, hundreds of genes with a multitude of physiological tasks are auxin-activated as described above. Quite a bit is already known about these auxin-activated genes. By contrast, little is known about the early events in the signaling chain such as the binding of auxin to its receptor. Yet, scientists need this information on early signaling events to elucidate how and why a single signal molecule such as auxin can activate so many different genes. This particular question was addressed by the Leibniz plant scientists around Luz Irina Calderón Villalobos in Halle (Germany).

Auxin does not just bind to one receptor protein. Instead, it acts as molecular glue between the two main components of a receptor complex. These two components are the TIR1 receptor and an AUX/IAA repressor, a protein which blocks the respective growth and development genes. Auxin couples these two main components to each other. Subsequently, the AUX/IAA repressor is destroyed in a complex cellular process. This decomposition of the repressor relieves the repression of the target gene. Now, this gene is readable.

In Arabidopsis, researchers identified six different TIR1-like receptor proteins and 29 different AUX/IAA repressor proteins. In theory, the auxin hormone can couple any combination of TIR1 receptor and AUX/IAA repressor. Via the resulting multitude of possible receptor-repressor complexes, plants may be able to meet their various challenges with the activation of just the right growth and development genes.

Recently, Leibniz plant scientists were able to show convincingly that this is exactly what happens. To demonstrate this, the researchers compared the binding characteristics of auxin to the AUX/IAA repressor proteins IAA6 or IAA19, and to the receptor TIR1. By comparison with the receptor complex TIR1-IAA6, the receptor complex TIR1-IAA19 binds the phytohormone auxin more strongly and has a more pronounced effect on the following steps in the signaling chain. As a consequence, different genes in different tissues may be activated at different times.

Interestingly, the here described repressors IAA6 and IAA19 have very similar structures and vary only in a few building blocks. The genes coding for IAA6 and IAA19 are closely related members of the same gene family. During evolution, one gene derived from the other. Even though these genes are a close match, the corresponding repressor proteins IAA6 and IAA19 behave differently. The Leibniz scientists in Halle (Germany) surmise that a so-called protein subfunctionalization occurred during evolution.

The duplication of these two repressor genes was probably due to a single duplication of the whole genetic information (genome) in one Arabidopsis plant millions of years ago. Over many generations, numerous mutations could be established in these kind of sister genes. During this process, one of the sister genes retains its original function whereas the other one is free for changes to function more efficiently or in different plant tissues or in different developmental phases. This type of subfunctionalization, the researchers conclude, is also the case for the investigated AUX/IAA proteins and probably for additional gene copies of the repressor.

Genome duplications give plants tolerance for mutations and with it a chance to adapt to climatic and environmental changes. This genetic flexibility in plants accounts for the emergence of new proteins and supports their survival. Comprehensive studies of closely related members of the same gene family gave the Leibniz researchers splendid insights into evolutionary processes. While they look at only a snapshot of evolution in a tiny window of time, they can nevertheless draw inferences to the past, project into the future and embark on new scientific discoveries.