1000 visitors at the Long Night of Sciences 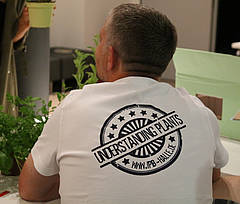 With over 1000 visitors, the 17th Long Night of Sciences was a great success for the IPB. Both the lectures by Thomas Vogt and Jürgen Schmidt, as well as our popular Street of Experiments proved to be a crowd puller. In addition, guided tours to the CryoGrinder (Sophie Dietz), the Confocal Laser Scanning Microscope (Bettina Hause and Hagen Stellmach), the NMR devices (Andrea Porzel) as well as the phytochambers and greenhouses (Gina Stamm and Antje Hellmuth) were so popular, they had to be given more often than originally planned.

The feedback from the guests was consistently positive. Many praised the IPB’s program as a great blend of information and entertainment that makes them return every year. The positive resonance shows the institute’s outreach event is very appealing to the public. Of course, such success can only be achieved through teamwork. In advance and during the event, many helpers contributed to organize and realize this successful evening. They were rewarded with enormous interest, many questions and amazed children's eyes.