Smash by the beach: IPB team participated in the Halle company cup 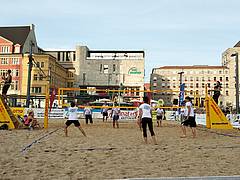 The IPB volleyball team took the 4th place in the B final at the company Beach Cup Halle.

After recently having played the table tennis ball at our institute, we continued with a larger ball, yet with a smaller team. Pauline Stark (NWC), Cătălin Voiniciuc (UNG), Sandra Klemm, Nancy Tang, Michel Heidecker and Christin Naumann (all MSV) teamed up for the City Beach Halle Company Cup in beach volleyball on 13 and 16 August. A total of 16 teams from all over central Germany had arrived to fight for the title on the market square in front of the historic backdrop of the Red Tower and in the very best sunshine. "The atmosphere was great," says Christin Naumann, "and all the teams played at a high level". The IPB team gave their best and reached the 4th place in the B final. The tournament also had a decent advertising effect for the institute, as the announcer introduced all involved companies and institutions several times and with fair amount of detail. The IPB will also be competing again next year and formation of a team is already in full swing.