Old skeleton on the vineyard 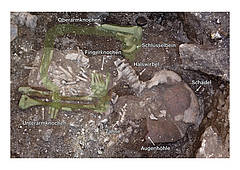 The construction site of the new R2 building brought it to light: the IPB stands on very old ground. When the building pit was excavated, the remains of a house from the Bronze Age (2200 to 800 years B.C.) were found, barely recognizable to the untrained lay eye. It is not known whether the people here also did plant research at that time, but they extracted salt. In addition to the regularly arranged discoloration of the ground, which marks the wooden piles of the house, two small bronze rings and a stone axe were discovered, as well as the remains of technical ceramics for salt production. "Presumably, the settlers at that time brought the brine from the springs in the valley," says excavation director Thomas Kubenz of the Saxony-Anhalt State Office for Heritage Management and Archaeology. "There was a lot of forest up here," says Kubenz, "enough wood to boil the brine."

But even the Bronze Age settlers were not the first to set foot on the hill. In the defined excavation area, which the local archaeologists examined, they also found a grave from the Neolithic period (5500 to 2200 years B.C.). "This is a great hit for the relatively small excavation area," says the archaeologist happily. Due to the high lime content in the soil, the skeleton, estimated to be about 5000 years old, is very well preserved. It lies in the crouch position typical for the epoch, bones and teeth are easy to recognize and mostly intact. "It was probably a young person," explains Kubenz, "but the exact age and sex can only be determined by anthropologists". However, it is still unclear when this will happen. Grave goods were unfortunately not discovered. All findings, 40 in total, were neatly documented, sorted, packed and archived in the magazine. The collected data find their way into research databases, where they remain until they are excavated again.

The pelvis as well as the femur and tibia, Foto: IPB